Despite their name, cuttlefish are not fish or even vertebrates. They are mollusks and more specifically cephalopods, being closely related to squid and octopus. They derive their name from the cuttlebone, which is a hard, internal shell primarily composed of aragonite and utilized for buoyancy control. Belonging to the order Sepiida, cuttlefish possess the general cephalopod body plan with the head and mantle forming a single unit from which eight arms and two sucker-covered tentacles are attached.

Cuttlefish range across much of the Old World from the Western and South Pacific to the coasts of Africa to the Mediterranean and North Seas. They are mostly warm water species, living in shallow habitats near the coast. These animals generally range in size from 15 to 25 cm while the largest species can grow to 50 cm. The life expectancy of cuttlefish is from one to two years in the wild (Norman 2000; Reid 2006; Roper 1984).

A cuttlefish uses a variety of colors and patterns to camouflage with a leaf below it on the seafloor.

Cuttlefish are most famous for their ability to change their skin color in mere seconds. Even more so than other closely-related cephalopods, cuttlefish use color and pattern changes to communicate with other cuttlefish, to camouflage themselves when in danger, and to frighten off potential predators (Norman 2000; Reid 2006; Roper 1984; Shohet 2006).

When cuttlefish are camouflaging with their environment, substrate contrast and particle size are the two main factors that cuttlefish use to adjust their body pattern to display a wide array of patterns from uniform/stipple, to mottle, to disruptive (Barbosa et al 2008 – Cuttlefish Camouflage).

Uniform/stipple and mottle body coloration are two camouflage patterns commonly used by cuttlefish. These two patterns can be generally grouped under the term “background matching” (Buresch 2011).

Uniform coloration involves minimal or no contrast variation in skin color. Uniform coloration is used when cuttlefish camouflage with open, uniform sand or uniformly colored rocks or when they are hiding in the shadows. Stipple patterns are often considered to be a subset of uniform patterning. Stipple patterning is characterized by a uniform distribution of small, rounded spots. This pattern represents a transition phase from uniform to mottle patterns.

A cuttlefish uses a uniform/stipple pattern in a similar shade of beige to blend in with the sand in its environment.

Mottle coloration is defined as small-to-moderate-scale light and dark splotches distributed fairly evenly and repeatedly across the body. Low-to-moderate contrast between the light and dark patches characterizes this pattern (Hanlon et al 2009).

The pattern cuttlefish choose to display generally matches the pattern and contrast of the substrate it is attempting to camouflage with. Often, a general background match is chosen and the cuttlefish will change its body color and pattern to generally resemble the contrast, texture, intensity, and color of the substrate but the exact pattern will not match the immediate background (Hanlon et al 2009).

Cuttlefish: Chameleons of the Sea

Disruptive patterning is a type of camouflage which is characterized by high-contrast light and dark patches in a random orientation that might also disrupt the organisms shape and orientation. Examples of this can be seen everywhere, even in human behavior, in which soldiers wear camouflage in order to hide themselves from enemies.

Stark contrast is seen in this cuttlefish as it uses a disruptive color pattern to break up its outline as viewed by overhead predators.

Cuttlefish use disruptive components typically for blending in with larger particles and objects, rather that fine gravel. Additionally, this camouflage mechanism is used when the edges of the background are clear and discrete. Other factors that signal for disruptive patterning are the visual depth of the object, as well as brightness of the background. There continues to be a lot of stipulation on the mechanisms of disruptive patterning in cuttlefish due to its complexity and nearly instantaneous transformation.

A cuttlefish uses a uniform/stipple pattern in a similar shade of beige to blend in with the sand in its environment.

The cuttlefish has a highly evolved system of skin coloration that it uses for camouflage and display. Being able to blend into a variety of environments, a camouflaged cuttlefish is often indistinguishable from animals of the same species. You could say that cuttlefish are truly nature’s masters of disguise!

Can Cuttlefish camouflage in a living room? – Richard Hammond’s Miracles of Nature – BBC One

Cuttlefish: Chameleons of the Sea. YouTube. Discovery, 11 May 2010. Web. <https://www.youtube.com/watch?v=WqMNjUp6UeA&gt;.

In the ocean, for every ten meters you travel down the pressure increases by one atmosphere. When humans experience high pressure, their lungs begin to compress and the body changes how blood is distributed in the body. We can only survive as long as the pressure inside our bodies is enough to balance the pressure outside. However, there are a number of creatures that have adapted specifically to live in high pressure, and the resulting physical appearances can be strange. 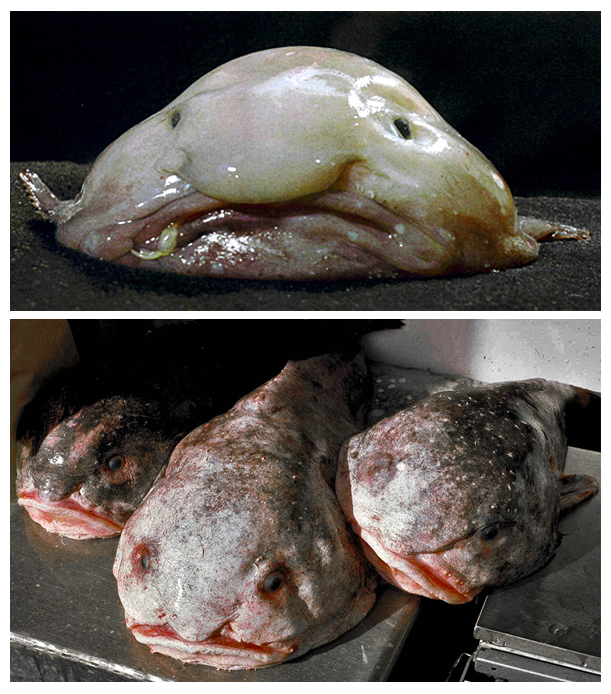 In 2013 the Blobfish, Psychrolutes marcidus, was voted the World’s Ugliest Animal. Normally experiencing pressures many times that of sea level, when brought to the surface its low density flesh becomes deformed, and the result is its sad, gelatinous face. The Blobfish typically lives off the coast of Australia and Tasmania at depths of 600 to 1200 meters, where it floats above the sea floor. It is able to do so due to its primarily gelatinous flesh, which lacks muscle and allows the fish to withstand high pressures and move more efficiently over the bottom of the sea. Though the Blobfish has never been observed feeding, since it floats across the sea floor and lacks the muscle to chase prey, it is thought to eat matter that can float into its mouth, including crustaceans, sea urchins, and mollusks. Unfortunately, however, despite being inedible, the Blobfish is often caught accidentally by deep-sea trawlers, and is quickly becoming endangered.

Another creature notorious for its strange appearance is the Goblin Shark, Mitsukurina owstoni. Pinkish-grey with a flabby body and soft skin, it also inhabits the deep sea with a depth range of 40 to 1,200 meters. Just like the Blob Fish, the Goblin Shark has a density close to seawater, and waits to ambushes its prey rather than actively pursuing. Unlike the Blobfish, however, it feeds midwater rather than at the bottom of the sea. The flabby and elongated snout is thought to be used to detect prey, and its protrusible jaw, for which it is well known, is used to suck in its catch. For a while scientists actually believed there were a number of different species of Goblin Shark, since in preserved specimens the jaw would stiffen into place, and most had been preserved with jaws protruded to differing points, changing the appearance of the entire head. This was likely due in part to the relatively small amount known about the species, since they are rarely seen or caught, and also therefore used for little. However, scientists believe that the Goblin Shark could be more common than originally thought, since they seem to be widely distributed, with specimens caught near Japan, New Zealand, southern Africa, and other locations around the world. Last but not least is the Vampire Squid, Vampyroteuthis infernalis. This creature is known to have the largest eyes to body ratio of any animal. Like the Blobfish, the vampire squid has a gelatinous body that is capable of drawing its eight, web-connected arms up and over itself to form a protective web. Protruding off of the eight legs are fleshy spins called cirri, adding to its strange appearance.  One of the many eerie characteristics of this creature is its ability to bioluminescence through its light-producing organs called photophores. The Vampire Squid has the ability to “turn on or off” the light and change intensity to create patterns to confuse predators and prey.  Unlike the Blobfish and the Goblin Shark, the Vampire Squid travels fast, up to two times its 6 inch body length per second. Although not much is known about its feeding habits, it is believed to have a diet of prawns, copepods, cnidarians, and other small invertebrates. The vampire squid’s ivory beak-like jaw, located within the webbing, has been found in the stomach of seals, whales, and large fishes. This squid is found throughout the worlds’ oceans, but mostly tropic and temperate areas at depths of 90 to 900 meters. Scientists believe that the Vampire Squid prefer to be in temperatures of 2 to 4 degrees Celsius.

Never extrapolate beyond the evidence, and where possible use multiple sources.

Read around your subject – never present a single paper/report as authoritative without cross referencing it to other work in the field.

Remember that different sources should be weighted differently according to their authority – a blog post carries less authority (usually) than a peer review paper for instance.  And media pundits usually are not as authoritative as established researchers.

Always spend a few minutes Googling your subject to make sure you are not repeating what others have written about, or are missing an important angle.  This is especially important if there is significant history to your subject you are otherwise unaware of.

If you use images, always make sure you have permission to use them, and acknowledge your sources appropriately.  Remember that an image is part of your narrative – make sure that it enhances rather than detracts from the narrative in your post.

Never write as if you are an expert in a subject, unless you are.  This usually (but not always) means having a MD or a PhD in a relevant area.  Rather, write as in intelligent and informed reporter of someone else’s work.

If there are controversies or differences of opinion surrounding your subject, report then fairly.

Ask someone else to read your drafts – all writers are myopic when it comes to their own work.

Before pressing “publish” ask “is everything I have written defensible from the current state of knowledge?”

If you wish to express your opinions in a piece (and in the realm of public health this is expected, as your role as a professional is to help improve health and wellbeing, not just write about it), make it very clear that these are your opinions.

Remember, your role is to act as an honest and independent conduit between the reader and the information you are writing about

And at the end of the day, remember that honest errors can be corrected in posts – as long as you acknowledge them rather than hiding them.

Welcome to your new blogging site! We can now practice blogging and reading each other’s posts so we can feedback from classmates and friends.

Please send me your entries so I can provide feedback before we do your initial postings.